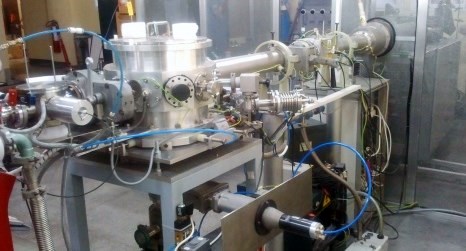 This facility is a 60 keV Danfysik ion implanter that permits ion implantation like helium, hydrogen and deuterium ions between others, for studies related with fusion research. The implanter staff have designed and developed different irradiation chambers and experimental set-ups depending on the study requirements. The developed experimental systems permit in-situ optical, electrical and desorption measurements. For example simultaneous ionoluminescence and surface electrical conductivity measurements can be made thus allowing correlation between macroscopic material degradation and defects produced by implantation.

The facility has been used regularly to implant H, He, D ions in metals and insulators in order to evaluate microstructural surface degradation, ionoluminescence, surface electrical degradation and to implant He and H isotopes to perform diffusion and desorption experiments. These studies can be carried out at controlled temperatures, from liquid nitrogen up to 1000 C. Available special irradiation chambers and sample holders have been designed by the implanter staff and fabricated at the CIEMAT workshops.

In order to characterize candidate materials with possible applications in nuclear fusion reactors, a new instrument to undertake in-situ magnetometry studies is under development at IMDEA for the ion implanter located at Ciemat. This is being done within the framework of a collaboration between the Spanish National Fusion Laboratory and Advanced Magneto-Optics and Permanent  Magnets divisions of the Nanomagnetism Program at IMDEA Nanociencia (this work is partially financed by project ENE2016-76755-R, MINECO/FEDER). The new system is based on a Variable Temperature/Full Angular Range/Vectorial MOKE magnetometer developed previously (J.L.F. Cuñado, et al. Review of Scientific Instruments 86 (4), 046109) at IMDEA. Based on this instrument a portable prototype is now under construction and it will be directly located at Ciemat implanter (figure, prototype under construction).

In parallel, a magnetic enclosure, to enhance magnetic flux, has been designed and built. It will allow optical access to the aforementioned magnetometer (see figure bellow) when carrying out irradiation experiments under strong magnetic fields and at high temperatures on the ion implanter. This development has been undertaken in collaboration together with Ingeniería Magnética Aplicada, (IMA, Ripollés, Barcelona), a company dedicated to research and manufacture of permanent magnets.

The collaboration also has access to other material characterization techniques at IMDEA Nanociencia, such as Kerr microscopy which is used to explore the effect of damage in magnetic domains of FeCr alloys.