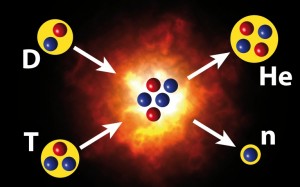 The Deuterium-Tritium fusion reaction, with reaction products Helium and a neutron

A fusion reaction is the process whereby two light nuclei join to form a heavier nucleus.
Depending on the nuclei, the weight of this heavier nucleus may be slightly less than the sum of the two light nuclei, and the weight difference is released in the form of energy according to E = mc2. A lot of energy. Therefore, fusion is a very efficient way of generating energy, much more so than any chemical reaction, like burning wood or oil: one fusion reaction produces about 10 million times the energy of one chemical reaction.

Unfortunately, the two light nuclei are both positively charged and repel each other.
To overcome this repulsion, the mix of light nuclei (the fuel) must be very dense and have a high temperature, and this situation must be maintained over some time. This situation is called ‘confinement’. The quality of confinement is measured by the ‘Lawson criterion’, which is the product of density, temperature, and time. 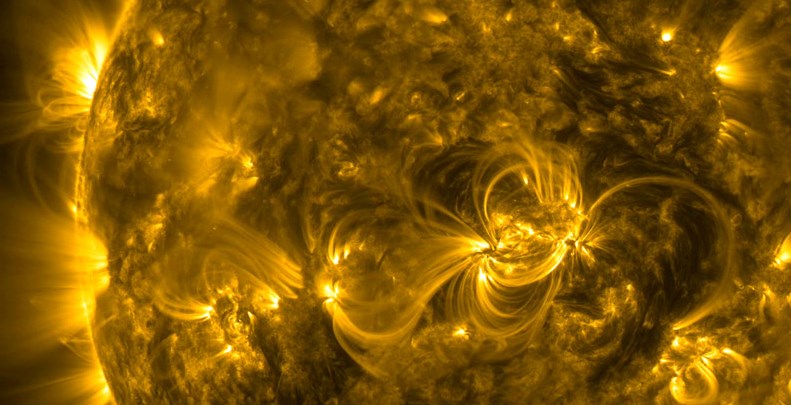 The various possible fusion reactions require different values of temperature and density for optimum efficiency. Current research focuses mostly on the Deuterium-Tritium reaction (two isotopes of Hydrogen), which is one of the easiest to achieve, although future reactors may prefer other reactions. Even so, typical required temperatures are around 100 million degrees Celcius. These conditions have already been achieved in the laboratory.

As a method for energy generation, fusion offers important advantages regarding environmental protection and safety. Since fusion reactions are not chain reactions, it is not possible that the system runs out of control. The reaction can be stopped at any time, simply by shutting down the fuel supply. The fuel, consisting of deuterium and lithium, is available everywhere on earth, in sufficient quantities to generate energy for millions of years. Furthermore, fusion reactions do not produce any greenhouse gases. The reaction itself only produces helium, which is a safe gas that is often used to fill children’s balloons.

The most important security aspect of a fusion reactor is the presence of tritium, which is a radioactive gas, produced inside the reactor from lithium. Due to this local production, it is not necessary to transport any radioactive material from outside to the reactor. The amount of tritium needed at any one time is very small, so that a power plant based on this principle would never contain a great quantity of it. The fusion reactor wall, being exposed to the radiation emitted by the plasma, becomes radioactive over time, but the greater part of thos radioactivity will disappear over a time span of some fifty years, so that fusion reactors will not suppose a heavy burden for future generations.

The goal of the international investigation in the field of fusion is to design a prototype fusion energy power plant that is in accord with today’s society’s demands: namely, it must be safe, reliable, sustainable, friendly to the environment and economically viable. Over the last decades, significant progress has been made regarding the scientific and technological know-how to achieve this goal.