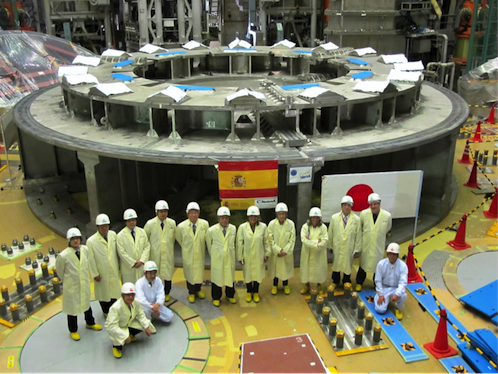 Cryostat Base at Naka site

The Laboratorio Nacional de Fusión (LNF) leads Spanish participation in the “Broader Approach” agreement between the European Union and Japan. The LNF is responsible for the design, and subsequent manufacture, of the cryostat for the JT-60SA device, as part of the commitment of the Spanish government within the Broader Approach agreement.

JT-60SA is a superconducting tokamak that is currently being assembled at the JAEA laboratories in Naka (Japan). Its cryostat consists of a stainless steel vacuum vessel (13.5 m diameter, 16 m high and 485 Tn weight) which provides the vacuum environment (10-3 Pa) needed to limit the transmission of thermal loads to external components at cryogenic temperatures. The cryostat must withstand both external atmospheric pressure during normal operation and internal overpressure in case of an accident. It also serves as support for the complete coil system as well as the tokamak vacuum vessel.

Due to its multi-functional purpose, the cryostat has been divided in two large assemblies: the cryostat base (CB) and the cryostat vessel body cylindrical section (CVBCS).