The main research lines of the fusion materials group are described below.

Radiation resistant steels are going to form the structure of the reactor’s vessel and their specific parts, such as the breeding blankets or the divertor. Concerning structural materials the most damaging elements coming from the plasma will be the neutrons; these materials will be placed just behind the plasma facing components and thus will barely feel interactions with charged particles which would collide directly to the walls of the reactor’s chamber. The impurities and defects, created by neutrons through inelastic and elastic collisions, will evolve with dose and temperature and will cause damage in the microstructure leading to embrittlement, swelling, modification of its phase stability, reduction of its resistance and enhancement of corrosion.

Part of the Materials group is devoted to microstructural characterization –new phase precipitation, grain size, secondary phase precipitation, TEM studies –and mechanical—not only macro- but also micro-mechanical (by in-situ essays in SEM microscope) of new steels candidates for DEMO in both conditions: as-received and after irradiation (light and heavy ion implantations). Also corrosion and hydrogen isotopes permeation studies are performed. CIEMAT coordinates European tasks related to development and characterization of structural materials and enhancing the participation of other research centers such as CEIT or KIT, and the universities C3M, URJC and UPM.

Damaged insulator surface after He implantation.

Functional materials will be used in the diagnostics and in the heating and current drive systems (H&CD) of the reactors and will act as insulators, optical fibers, windows, mirrors or lenses. These materials will feel the effect of both the neutrons –which will cause mainly displacement damage and transmutation—and the gamma radiation –ionizing radiation which will be present both during operation as well as after shutdown. The gamma radiation produces excitation of the electronic charge states in the material which can lead to defect formation. The accumulated damage together with the presence of ionizing radiation affects the optical and dielectric properties of functional materials. On one hand it will induce light emission (radioluminescence) and loss of optical transmission in windows, fibre materials or mirrors. On the other hand it will affect the quality of dielectrics and mineral insulated coaxial cables by generating radiation induced conductivity (RIC), radiation induced electrical degradation (RIED), surface degradation or radiation induced voltages (RIEMF).

The materials group has expertise in the study of such phenomena and has helped to identify which materials are most suitable to be used in a fusion reactor. The work is made in active partnership with the industry to reach quality standards in the manufacturing of insulators and windows, supporting the design of ITER and DEMO diagnostics. All activities of characterization and radiation damage (gamma, electrons, neutrons) are in collaboration with other European laboratories. 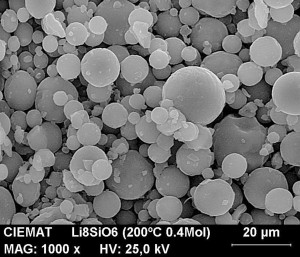 Lithium ceramics are one of the potential candidates for the breeder blanket, which will be in charge of the self-production of tritium in the future fusion reactors. As well as the other potential candidate for the breeder (the LiPb), they will be placed just behind the reactor’s first wall and therefore the fusion neutrons will be able to transmute the lithium in tritium. These materials because of its position and function will be affected by the neutron damage as well as by the ionizing radiation. The neutrons will not only be responsible of the Li transmutation but also will produce high amount of defects in the microstructure of the ceramics. Also the gamma radiation will be able to vary its electronic structure. The study of the effects of radiation damage which is conducted in our laboratories with different techniques is very important in order to establish the tritium desorption rate in the ceramic matrixes.

The DTF makes detailed studies on the effect of radiation (ions, electrons and gammas) on the thermal desorption of light ions in the solid breeder blanket candidates for ITER. Such activities are performed in collaboration with KIT and within the framework of EUROfusion project.

Modeling of the damage due to a displacement cascade in Fe.

Computational modelling methods can supply an alternative system for testing neutron damage on materials. Modelling of materials would help to understand damage mechanisms in materials under fusion conditions, being able to predict the evolution of these materials in different conditions and thus significantly reducing the number of time-consuming laboratory experiments required to test a new component, resulting in faster development of new materials. In the short-term it is unrealistic to expect that the physical approach can produce fully predictive models, quantitatively valid for direct technological applications, i.e. for real materials such as steels. Nonetheless, advances in multiscale modelling can help in the medium-term.

In the materials group we use and develop different modelling tools, such as MD, BCA codes (MARLOWE), OKMC and Rate Theory to study fundamental effects of radiation in fusion materials from the primary damage to its evolution with time, dose and temperature. To support the modelling we have developed experimental techniques –Resistivity Recovery and He desorption– to provide experimental validation of the modelling. These activities take part of the EUROfusion materials program and are also co-supported by the National Plan and the regional funding project TechnoFusion.