The transport of particles and heat is a fundamental topic for the achievement of an efficient fusion reactor. 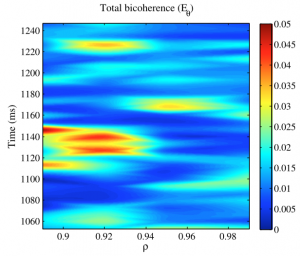 Zonal flow physics – The paradigm of turbulence control should include both mean and oscillating sheared flows. TJ-II findings have shown the importance of long-range correlations (with zonal flow-like structure) as a new fingerprint of the plasma behaviour during the development of edge shear flows, evidence of global transport modulated by zonal flows and the key role of electric fields, magnetic topology and reduced plasma viscosity to amplify them.

Impurity transport – Impurity accumulation is recognized as a potential showstopper for the development of fusion energy. In recent years, significant progress has been reported regarding the physics understanding of empirical actuators, like ECRH heating, to avoid core impurity accumulation. However, how exactly ECRH affects turbulent transport, plasma potential asymmetries and neoclassical transport remains a subject of intense study.

Momentum transport, intrinsic rotation and 3D effects – In large scale devices like ITER rotation driven by external forces will be limited. Therefore, it is important to quantify the role of alternative driving mechanisms of plasma rotation, like those related with plasma turbulence and fast particles.

Particle and energy confinement – Clarifying the physics behind uncoupled (heat and particle) transport channels is one of the main scientific conundrums for understanding ELM control techniques (e.g. using magnetic perturbations), as part of the ITER base-line scenario, and the development of plasma scenarios without ELMs (e.g. the I-mode).

Power exhaust physics – Power exhaust is one of the most critical, complex and challenging issues for the development of a fusion power reactor. Solid materials are at present the standard solution for plasma facing components, but are known to be prone to erosion, melting, dust formation and neutron-induced permanent damage under reactor-relevant plasma exposure. The LNF has developed an active programme for improving TJ-II plasma confinement by Li-coating, while exploring the power handling capabilities and fuel retention properties of liquid metals (Li and alloys) under the presence of capillary forces. 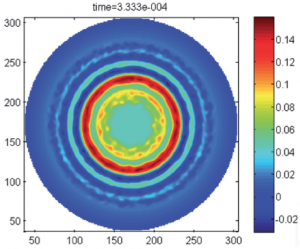 Gyrokinetic studies – Turbulence calculations are performed in CIEMAT in the frame of the Gyro-kinetic theory using the code Euterpe. Gyrokinetic equations have been derived to higher order providing the equations for the long-wavelength pieces of the fields that are needed to determine the rotation profile.

Stellarator optimization – The search for optimised stellarator design has been performed based on swarm strategy and includes the minimization of neoclassical transport and the improvement of stability.

Improvements in TJ-II plasma diagnostics and advanced data acquisition and analysis tools have led to new physics and better understanding of the confinement properties of fusion plasmas.

Towards the stellarator reactor. Supporting W7-X

The Stellarator concept offers an alternative route to a Fusion Power Plant with unique capabilities: steady state operation without the need of external current drive and the absence of plasma disruptions. Research at TJ-II will provide support for the W7-X stellarator, a key element of the EU stellarator programme, in some crucial research areas:

See Plasma Physics at the LNF