Top view of the TJ-II stellarator

The TJ-II project is the flagship project of the National Fusion Laboratory of Spain. TJ-II is a flexible, medium-size stellarator of the heliac type, the second largest operational stellarator in Europe (after W7-X).

TJ-II has a major radius of 1.5 m, an averaged minor radius 0.2 m and a magnetic field of 1 T. The highest temperatures are achieved by microwave heating (800 kW at 53 GHz) and by accelerated neutral hydrogen  beam (1.6 MW and 30 keV). TJ-II has 92 access windows for experimental diagnostics and machine systems.

TJ-II was designed in collaboration with Oak Ridge National Ridge (USA). Its construction has been partly financed by EURATOM (preferential support). The first plasmas were produced in late 1997. The main TJ-II construction milestones were: 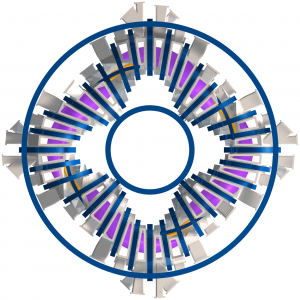 The goal of the TJ-II project is to study the physics of magnetically confined plasmas, with emphasis on the influence of the magnetic configuration on heat and particle transport. These studies should contribute significantly to international efforts towards developing magnetic confined fusion as an energy source. 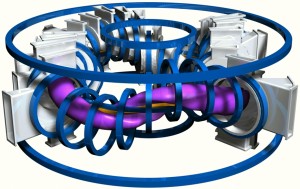 The TJ-II group is organized into Divisions and Units: