The TJ-II monitoring and control system consist of a fully computerized network of real time systems in order to guarantee both, people and machine safety, and to facilitate the experimental research. This control system has been fully developed and programmed by LNF Control Group in order to keep the whole control and knowledge of the system during its lifetime and it has been operating successfully since 1997. It was designed and built as a set of distributed and autonomous subsystems based on the standard VMEbus with embedded processors running the VxWorks real time operating system. The global architecture of the TJ-II control system is schematically shown in Figure. The control system has been broken down into the following subsystems: Fast Control, Master Timing, Vacuum Vessel, Coils protection, Gas Injection, Grounding Loops, Diagnostic timers, Emergency, Access control and surveillance. 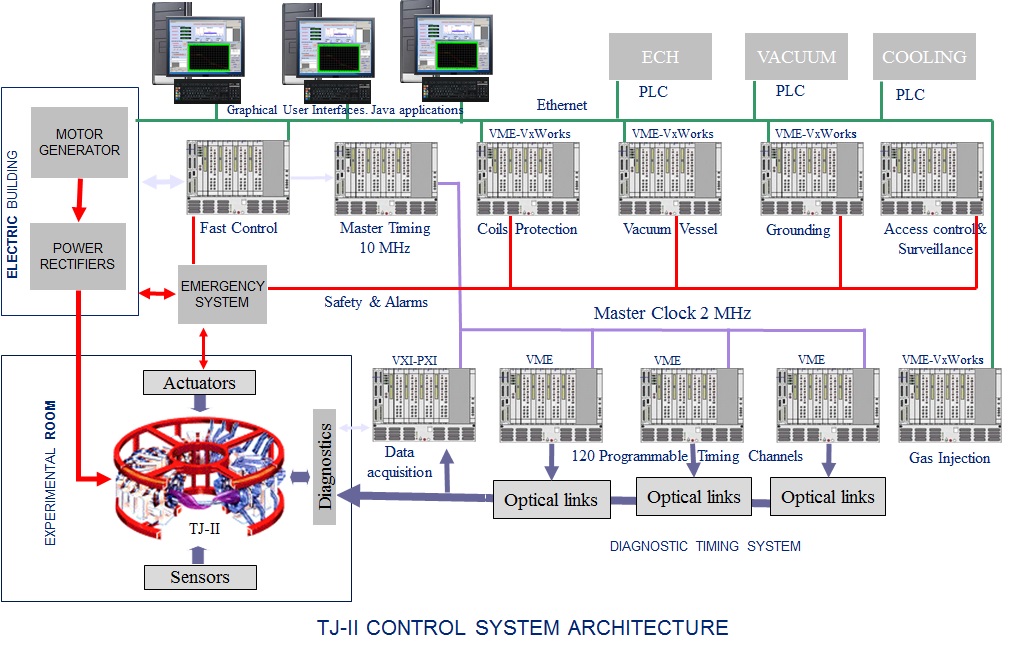 Fast Control System is used for monitoring and control the experimental pulses on a millisecond time scale, which is the strongest demand on time response in the TJ-II control. It has the following main tasks: initiate the states sequence, monitoring current and energy in the coils, real time calculation of function protections, on-line generation of currents profiles, and signals interchange with the electrical system.

Master Timing System provides the main clock, trigger signals and events used to synchronize all subsystems during the shot sequence. This provides the slow sequence with a maximum time span of 65535 seconds, and the fast sequence which lasts a maximum of 3 seconds. The Timing System is divided in two sections: Machine section, including the main clock generator (10 MHz) and 40 independent timing generators; and Diagnostics section with 120 independent timing generators housed in 3 VME crates, which are spatially distributed around the machine. In both sections all I/O signals are linked via fibre optic.

Vacuum Vessel System has two main tasks: vessel protection during the shot, which is made reading 192 thermocouples and 32 mechanical displacements, and baking process of the vacuum vessel at 150º C.

Gas Injection System provides the appropriate values of plasma density during the experimental pulses. The gas is puffed using a set of 4 piezoelectric valves, which are driven by 4 pre-programmed voltage signals. Four waveform generators, composed by a set of VME modules, generate the output signals. The gas injection system synchronise the waveform generation with the TJ-II operation during the pulse.

Emergency system ensures the safe work of the people around the machine and protects components against any damage. A hardwired alarm system connects and performs the interlock alarm logic in a sure and very fast way.

Safety system is composed by the access control to the experimental room. The machine hall is supervised by television cameras and monitoring in the control desk. At the lowest level of control of the cooling, vacuum, power supply and gyrotrons there are several PLC´s. A new communication middleware software architecture called XML-based Messages Distribution Service (X-MDS) has been developed and applied for the TJ-II control system. It has been created in response to the need to standardize the message publish-subscribe programming model. This middleware permits data, events and commands to be sent and received between distributed control applications that run on different real-time operating systems (OS9 and VxWorks) as well as Java-based applications running on any Windows or Linux platform. It has been fully tested and found to be both reliable and safe.

Specific software tools have been developed to create, manage and monitor any distributed control variables involved in TJ-II experiments. The graphical user interface for each subsystem has been developed using the JAVA programming language.